Winner of the the If:book New Media Writing Prize 2017

The second of the Ambient Literature commissions features a story written by James Attlee, author of titles including Isolarion, Nocturne, Station to Station, and Guernica: Painting the End of the World (forthcoming October 2017). His new ambient literature work, The Cartographer’s Confession, combines fiction and non-fiction, imagined and real locations, to create a story of migration, loss, betrayal, and retribution that builds to a savage denouement.

The smartphone app allows you personal access to source materials for the film The Cartographer’s Confession, collected by screenwriter Catriona Schilling (CS). It features audio, prose, illustrations, an original collection of 1940’s London photographs, 3D soundscapes, and a bespoke musical score by group The Night Sky.

Readers in London can immerse themselves in the film’s locations, experiencing elements of the plot in the places where they happened. A chapter at a time, cassette tapes of Thomas Andersen’s memories, contemporary photographs taken by his childhood friend Alessandro, personal letters, and Schilling’s research notes are released, leading you on a journey to the dark secret at the story’s heart.

The app’s ‘Armchair Mode’ offers a different experience, enabling the reader to explore the research materials and construct their own narrative, anywhere they may be. 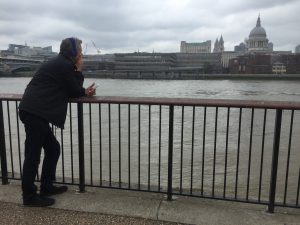 James Attlee speaks with Emma Whittaker about writing The Cartographer’s Confession and the unique opportunities offered by Ambient Literature.