In early 2014, a meeting of interested parties was convened at the Pervasive Media Studio in Bristol’s Watershed. Between us, we had a strong track record in digital projects, especially those that were informed by books and literature, and the agenda consisted of two words:

Discussion was lively, informed, and optimistic, and a year later, we submitted a proposal to the AHRC, sat back and crossed our fingers.

Truthfully; we don’t know what Ambient Literature is. We’ve started to map the territory, to define by identifying borders and by testing the edges. It’s important to note though, that we don’t want to reduce the idea to something tight and defined, rather our intention is to open it up, so show by doing, making and thinking. Art is, I read recently, about panning for gold, finding glints of elemental truth within the noise of the world. We do know that Ambient Literature asks for writing to be specific, to be for this form. That there are rules, grammars of making and thinking about readers and texts in new ways.

We’re going to commission three original pieces of work, by writers at the leading edge of working with literature, space and technology. These will be our headline projects but there’ll be other pieces too. Smaller, messier and provocative. The first: Experiment i. will be on this site soon.

And now we begin. We have two years to demonstrate that those two words and that meeting were the beginning of something interesting. That, by being adventurous, rigorous, curious, and zealous, we can redefine the rules of the game a little.

Andrew Rosenheim wrote in 2010 that, with regard to digital and publishing:

Formats and fears aside, there are ways forward for us all.

We’re going to be here for a while, moving forward, looking for gold. Let us know how we’re doing. 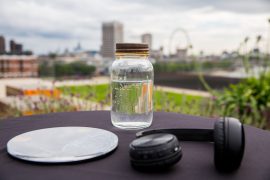