This is an edited version of the talk given by Tom Abba introducing the Manifesto for Ambient Literature given at the start of the Ambient Literature Symposium in Bristol, May 2017. You can download a PDF of the 2 parts of the manifesto here and here.

I’m Tom Abba and for the next few minutes, I’m going to tell you what we know to be true about Ambient Literature.

Firstly — Ambient Literature is comprised of many ideas. Some of them might be in conflict with each other, and we think that’s fine. We think that’s a healthy thing for an emergent form. Some of them we’ve borrowed from existing media and works that are already in the world, and, honestly, that’s fine too. The content of any medium is another medium, after all. Some of them are simple things, almost throwaway ideas and notions. Some of those ideas are complex and awkward. But they’re all things that we think are worth considering in respect of writing in a new space.   The second truth — Ambient Literature isn’t new.

We know that we’re defining something that, paradoxically, already exists. Locative narrative, placemaking spaces, immersive theatre, performance, all of these forms for experience are part of our canon. They all tell us something about the work we’re studying, and the work we’re making. We stand here on the shoulders of, if not giants, then very smart people making passionate work that inspires us and delights us in equal measure.

And third, and lastly, this is a collaborative project.

The three university partners — UWE Bristol, Bath Spa, and Birmingham all contribute an equal voice in this. Our writers have a voice, as does our technical partner. Our advisory board have a vital role to play in being our interface with the commercial world. We didn’t set out to sit in an ivory tower and pontificate about ambience and literariness, and I dearly hope we’re not going to do that over the next two days.

As suggested on the boxes [containing the manifesto] you all have, you have a voice in this project too. I want to explain what those boxes contain, and by way of doing that, introduce the symposium.

We all know something about Ambient Literature. Matt, Jon, Ian, Kate, Michael, Amy, and Emma. Duncan, James, Tom, and Ben. Louise and Nick. We know something based on our research, or our experience of making this work, our interests, our gut feelings, and our knowledge. Our instinct and our judgement.   Part of this project is to describe what it is that we know. To make some statements we can stand behind and defend, develop, and challenge. To draw some lines in the sand and then redraw them more accurately a second time.

I’d call that a Manifesto.

It’s also an umbrella. An umbrella under which we can describe something that aspires to be invisible, to exist as a transient trace in the fabric of the city. To be experienced as an echo. Where words might not be written, but spoken into the evening air, and heard by another ear, half a world away.

Whatever Ambient Literature is, it has porous borders. Definitions that flow into one another and defy the urge to be fixed, to be pinned like so many dead butterflies, fixed with hairspray and sealed under glass.

We’re in Watershed today, which bears reflection too. Watershed, and the Pervasive Media Studio, has been our home during this project, and is home to a wider community of artists, writers, technologists, and creative and critical thinkers. The Pervasive Media Studio might not have conceived of Ambient Literature, but it is definitely responsible for its midwifery. The spirit of collaboration and exchange, of spaces for ideas to bear fruit, embodies what we want for this project, and also, while we’re talking about umbrellas, the manner in which the Studio is an umbrella for difficult, passionate work, that might not be Pervasive any more, but under which banner we’re proud to stand, is part and parcel of how this project was designed, and how it runs.

The Manifesto we’ve written is in the box we gave you when you arrived. It comprises twenty three objects, each of which interact with the others. More precisely, it’s an attempt to define without dense language, to describe and demonstrate as much as declaring.

There are twenty two cards in there, and a printed page at the bottom of the box. That page isn’t a definition of Ambient Literature, but is pretty close. Matt Hayler and Michael Marcinkowski wrote it, and they honestly stand by every word. We asked them to compose something just this side of parody. Something that makes sense, but resists a clear reading.

Let me explain:
Its our job as academic researchers in the creative disciplines to open up possibilities, to conjure potentials. Our aim is that in starting the work of describing this field we can also create a map for that territory, marking paths for others to follow, writers, publishers, content platforms; so although the project is in dialogue with the people that can apply our knowledge in the world it doesn’t want to insist on closed definitions that get in the way of creative development.

The cards, each of them numbered, each correspond to a footnote on that definition. There’s no hierarchy to the sequence; they emerged organically from the process of writing and making. Collectively, they describe a space, an idea of what Ambient Literature might be. If it helps, think of them as a memory palace you construct for yourself. Some cards are bigger than others, some grander, some are hallways, others are box cupboards. Some you’ll forget entirely, until you turn a corner and find them there waiting for you.  You can read the definition, or the cards. You can read the cards without the definition, or with it. You can read them in order, or by a random shuffle. Everything is fine, and how you read them is completely up to you. There is no right answer.

Some of them are clear, easily explained. A footnote that clarifies a point. Others will ask you a direct question, will prompt a thought, or a reflection. Some, though, are provocative, awkward, difficult things. They don’t play nicely with the other cards. They’ll sit at the bottom of the box, growling at the reader and nagging for attention. I’m not going to tell you which ones those are; you’ll have to find them for yourselves.

We’d like you to read them over the next couple of days. Talk to us about them, tweet them, Instagram them and share them with the world. Especially if you have something to say about them, singly, or collectively.

For me, personally, they’re a set of signposts toward something that will emerge from the second half of the project. We’re going to write two books (we might write three). One of them will be a conventional academic textbook that describes the landscape we’ve been examining. It’ll be a hundred thousand words or so, and we’re staring work on it in earnest over the summer.

One of the things that first book will do is to offer the first really considered and rigorous analysis of what’s going on for audiences and readers when they experience the work we’ve commissioned; another is to take a really close up look at the modes of writing, the forms and the poetics of the ambient literary text so that we can start to think about what kinds of stories, what forms of language and what kinds of sound are most effective in this space.

The second book isn’t an academic text though. It’s a cookbook, or a guidebook to writing and making in this space. Aimed at writers, developers and publishers, at makers, it, at least for the moment, grows out of this Manifesto and becomes an accessible, helpful document. A bootstrap guide to writing Ambient Literature and a guide, if you know your Picasso, to where to buy cheap turpentine.

As a team, we represent a number of different, complementary disciplines. We’re an interdisciplinary project, with different interests, backgrounds, and, importantly, different things to say about Ambient Literature. We don’t all see things the same way. Matt Hayler brings an interest in objects, in how we read them, in the related ontologies of artefact and human. Jon Dovey brings cultural ecology to the conversation; Kate Pullinger a deep knowledge of literary form, digital storytelling, and collaborative writing; Ian Gadd, the history of the book, of reading and reception; Nick Triggs knows more about everything than he lets on; Michael Marcinkowski is a Human Computer Interaction specialist who is also a poet; Emma Whittaker is responsible for production on our three commissions, and is a respected creator of locative, pervasive work in her own right; Amy Spencer’s work on DIY culture and low-fi making extends our work out of the academy. And then there’s me.

I’m a writer, and an artist, who is extraordinarily lucky to have these people to work with. I want to work out the grammar of writing in this space. How language works, how voices operate and how we approach the craft of writing Ambient Literature. My approach to this Manifesto comes from that place, and from the two experiments I’ve made while working on this project. Those experiments provided something to analyse, to pick apart and assess, and to think about how we’d make them differently.

There’s a whole other year of activity to come on this project, and there are plans for what happens afterward. We’ve only just got started.

A Manifesto for Ambient Literature 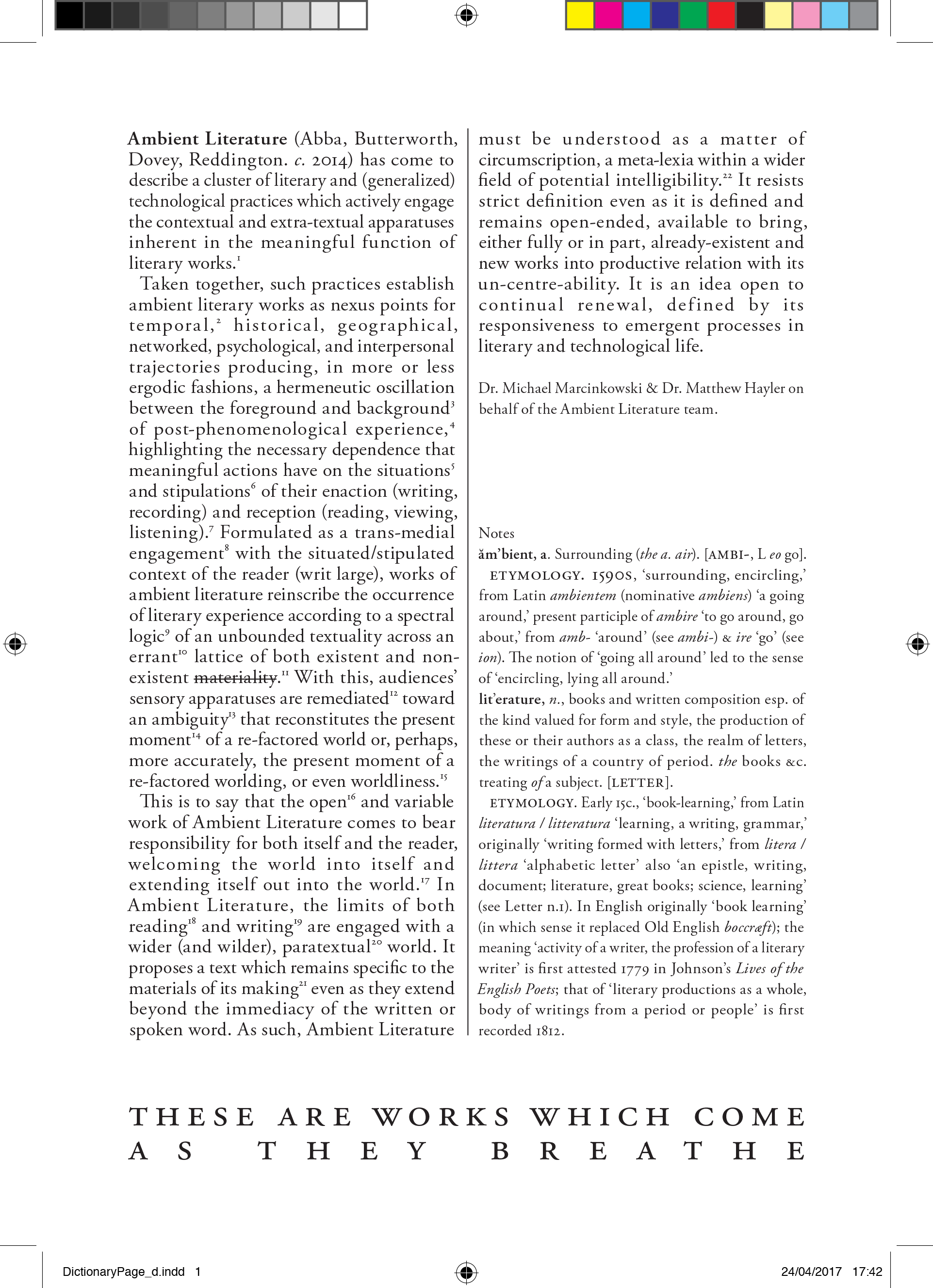